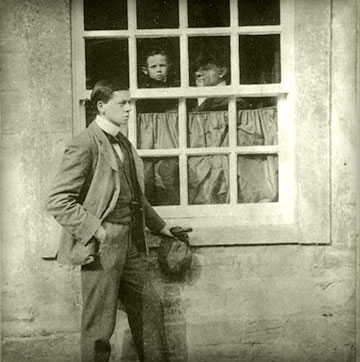 “They are grim and dispiriting, gloomy,
sombre and cheerless...”

— Charles Matlack Price on the works of the Brothers Beggastaff, 1922

Pseudonym used by the brothers-in-law William Nicholson and James Ferrier Pryde for their poster designs. ‘They joined forces in 1894, and for the next five years they produced a series of posters which by their bold simplicity and clarity of design revolutionized certain aspects of poster art througout Europe ... they presented the image in its starkest form; the background is stripped bare of unnecessary detail and the fullest use is made of the silhouette... Despite the brilliant originality of their work, or perhaps because of it, they received relatively few commissions and several of their designs never reached the hoardings’ (Dennis Farr, English Art 1870–1940, 1978).

Nicholson explained their choice of the name ‘Beggarstaff’ thus: ‘Pryde and I came across it one day in an old stable, on a sack of fodder. It is a good, hearty, old English name, and it appealed to us, so we adopted it immediately.’ They signed their work ‘J. & W. Beggarstaff’; in due course some people started referring to the ‘Beggarstaff Brothers', but the artists themselves did not care for this version.
Copyright © 2008-2022 by Martin S. Lindsay. All rights reserved.
Legal
Privacy
Contact